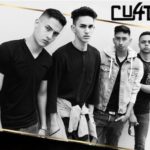 After numerous auditions and online scouting; all four members were selected in March 2018. Talented, creative, passionate and vocally blessed, all members of the band were destined to be CUATRO.

Born in Puerto Rico, Alejandro is 19 years old. He has been singing since he was 10 years old. He has a passion for music like no other at the age of 15 he competed in various national competitions and international “La Voz Kids”.

Second Youngest to 5 siblings Alejandro stands out through his talent and drive. He plays guitar and piano and loves to write songs.

Born and raised in Tijuana Mexico, Luis is 18 years old. He began singing at the age of 5. He is the eldest of two siblings.

By the time he turned 10 Luis began competing in local music festivals, it was then when he realized he wanted to be a full-time professional singer and performer. Luis plays the guitar, piano and ukulele.

Kole 20, is the eldest of five siblings, born in West Virginia with Puerto Rican heritage. Kole has music deep in his soul not only can he sing, but he also plays drums and dances. Growing up in the gospel community Kole was a singer at his local church.

His real appreciation for music began in 2015 when he moved to California to pursue his career as a singer/songwriter. He also auditioned for American Idol in 2016.

Born in Los Angeles 20 years old, Mexican heritage, Dany has one younger sister. He has been acting, singing and dancing since he was 5 years old, putting on shows in the living room. He began his professional vocal training in 2016.

Dany has auditioned for “Americas Got Talent”. He has also appeared in multiple music videos and on stage for various plays.

With their Latino heritage and the strong family values, they have in common. It has been easy for them to work together and bond from the moment they met. Each has proven to be a talented, easy going, respectful and professional performer and will take CUATRO successfully to the next level, stardom. Their debut single “Can We Talk” hit the airwaves July 17th, 2018 and is available for purchase at your favorite online music store.