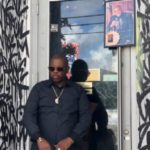 Wow – this guy can really crank them out faster than Dunkin’ can make donuts! From what I can find out about singer/songwriter Darrell Kelley is that he’s only been professionally involved in the music business for a little over a year. During that time he’s released two albums, one EP and twenty-three singles. Many of these releases have charted on national radio airplay charts and featured in entertainment publications over this very short time. His densely populated YouTube channel has racked up over a million views for his hefty catalog of music videos. Now that’s pretty, pretty impressive for a neophyte entertainer.

His latest album is called Here Ends the Lesson. Most of Darrell Kelley’s prior singles either appeared on either that album and an earlier one titled Unity, or included as part of his EP named Storm Is Coming. More recently, in the past few weeks to be exact, Kelley dropped two new singles which were not included on the albums or the EP. Beautiful is one and I’m So High is the other one. Whereas a lot of this artist’s past material seems to crossover into the Christian Adult Contemporary and Gospel style of music the two aforementioned new singles fit solidly into the more mainstream R&B, Hip-Hop and Electronic Dance Music genres so popular these days. So, Darrell is not someone who’s afraid to break away from the formula of past success in order to experiment and try something new.

The message behind Darrell Kelley’s music inspires others, touches hearts, feeds the souls, and influences lives for the better.

Digging a bit deeper into this musician’s background I also discovered he’s quite the entrepreneur. Like most independent artists Darrell Kelley created his own label, Viral Records, and his own publishing company, All 4 One Publishing. These provide one of the many platforms and pipelines he employs for which to channel his music to his growing base of fans. While it’s not unusual for Indies to start up their own music companies what sets Mr. Kelley apart from the crowd is that he’s also created and owns food and beverage companies, is invested in real estate in multiple states and he’s even found time to write and publish a book called The Book of U.G.U.E.A.M. When you talk about your movers and shakers you’ve got to admit, DK has a whole lot of shaking going on!